Artwork from Cambridge students is currently on display at ESU 11. 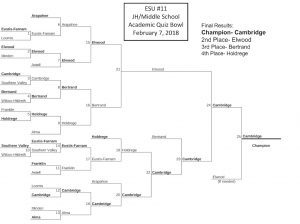 On November 1, 2012, the ESU #11 Staff Development Department coordinated a technology integration workshop for Cambridge and Arapahoe Public Schools. The facilitator for the day was Kevin Honeycutt.  Kevin is a technology integrationist and a staff developer from Central Kansas. He spent 13 years teaching K-12 art, and now travels the country and the world sharing ideas with educators.  During the morning, Kevin worked with students in grades K-12 and focused on Internet safety and bullying prevention.  During the afternoon, Kevin worked with K-12 teachers and discussed ways they could try new technology tools.  Kevin also shared the notion of “self-directed staff development” and showed teachers how they can build their own personal learning network.

Three members of the 2011-12 ESU 11 Learning Web Team presented their social studies projects and student activities at the recent NETA conference.   Justin Patterson of Wilcox-Hildreth, along with Brett Webster and James Blex of Cambridge presented their project focused on technology applications in the Social Science classrooms.

This year’s winners of the Harold Warp Memorial Inventor’s Choice Award were Cydney Hoskins and Konnor Nielsen from Minden. Their invention was the “Squeaky Clean Brush”. They received a certificate as well as a trophy that will be displayed at their school. Each inventor at Invention Convention casts one vote for their favorite invention to determine the winner.

Students were first judged in their grade level which was divided into groups called “Inventor’s Circles”. There were 14 different Inventor’s Circles which each had a 1st, 2nd, and 3rd place winner.

Our mission is to provide visionary leadership and quality services that support excellence in education.